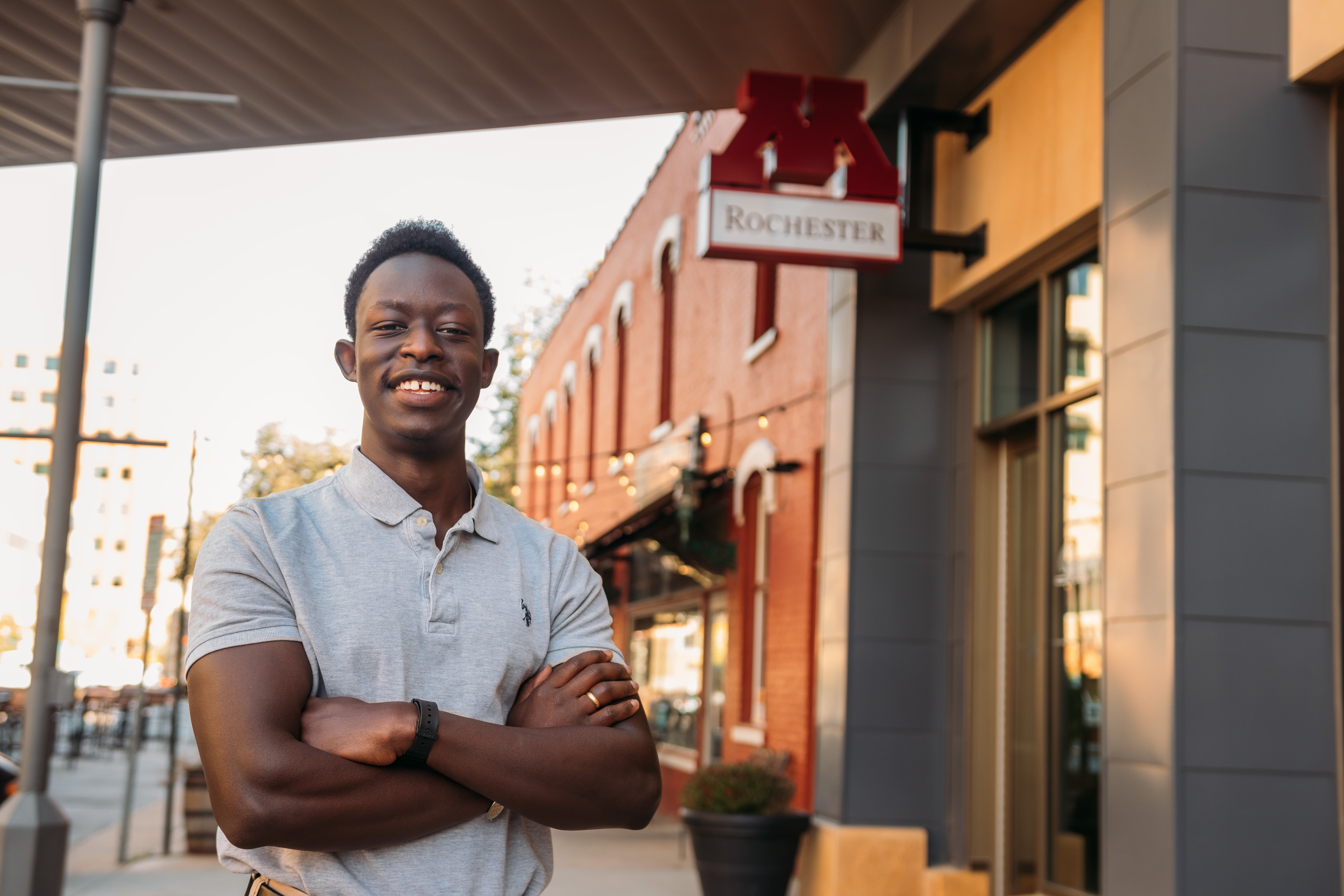 Pal Koak, a third-year student at the University of Minnesota Rochester, is a testament to the values of patience and determination, and the resilience of the human spirit.

He has experienced the hardship of a rare bleeding disorder, the plight of life in a refugee camp, and the culture shock of moving to a new continent — through it all, he continues to maintain a strengthened sense of purpose. He is now using his energy and passion to pursue a health sciences degree with the goal of one day becoming a physician-scientist.

“I want to take care of people who have bleeding disorders like me,” said Koak. “But at the same time, having to take infusions regularly, I realize there is a limit to medical therapeutics, and so I am interested in what causes it and how to stop it to begin with.”

A SEARCH FOR ANSWERS

Born in Ethiopia, Koak left the country when he was two years old to live in a refugee camp on the outskirts of Nairobi, Kenya. His family was concerned about his health; from the time he could crawl, his knees would swell up — and the family did not have an answer why. Not only was Kenya more medically-advanced than Ethiopia, the family felt that being in a refugee camp would open up the possibility of a medical transfer to another country, such as the U.S.

Once in Kenya, Koak was diagnosed with hemophilia, a bleeding disorder in which a person’s blood doesn't clot properly. The condition can lead to excessive bleeding after an injury.

Koak began getting prophylactic infusions, but the treatment proved to be costly. With each vial costing around $1,000, the family relied on Koak’s uncle in Austin, Minn. to send money.

“But that was not feasible,” explains Koak, “because you have to get regular infusions, and at the time I was doing it three times a week.”

The family soon turned to the United Nations for a medical transfer. However, it would be years before the application was accepted.

“Most of my memories in Kenya are in the refugee camp,” says Koak.

In 2008, after spending much of the first half of his life in the refugee camp, Koak arrived in the U.S. to live in Austin, Minn. He says it was a major culture shock. Not only was he in a new land, but his perception of America had been New York City and Hollywood, not the Midwest.

But while the sprawling farmland of southeast Minnesota may not have been what Koak imagined, he soon learned he had come to the right place.

“My uncle said, ‘hey, there’s this hospital here called Mayo Clinic. Let’s see if we can get you in.’ ”

‘IT COULDN’T BE A COINCIDENCE’

From the start, Koak witnessed first-hand what made the Mayo Clinic model of care special — even if he still did not fully appreciate the reputation that preceded the hospital.

“They were very hands on right away. My doctor (Dr. Vilmarie Rodriguez) and the care team that were there just started coming up with a plan for treatment and regular check-ups,” shares Koak, adding: “At the time, I didn’t really understand what the Mayo Clinic was. I only understood how well the team cared for me.”

Koak began traveling to Mayo Clinic regularly — sometimes three times a week — during his first years in Minnesota. Because he had not been getting regular infusions prior to coming to the U.S., doctors said he was on the verge of having arthritis.

“My knees were cantaloupe size,” he recalls.

Throughout his teen years, the infusions became less frequent, and today Koak is able to administer the infusions himself — meaning less time in the hospital, at least as a patient.

Motivated by his own life experiences, Koak is now on a path toward earning an MD/Ph.D., a rigorous program that requires seven to eight years of medical school. He hopes to one day treat patients like him with hemophilia, while also researching potential solutions through gene editing.

He says the decision to start that journey at UMR was an easy one.

“Knowing how close I would be to Mayo Clinic, I could not think of another university that would be more appropriate, considering what I went through,” he says. “It couldn’t be a coincidence there is a university that is here, right next to the hospital that I first went to when I came here.”

Already, Koak is taking full advantage of his time at UMR. He started in a research lab his freshman year thanks, in part, to a serendipitous interaction with a Mayo Clinic physician. And this summer he participated in an internship at the Hormel Institute.

He says the experiences — both in the classroom and in the lab — have opened his eyes to the value of teamwork and the possibilities that await him.

“It has influenced the way in which I approach science and medicine in general,” says Koak. “Because before I had these experiences in research, I thought of science as like Dexter’s Laboratory — it’s just one person who’s really smart and figures all of these things out. But coming to UMR and doing that research at Mayo Clinic, I saw it was a lot of collaboration.”

This story is included in Med City Beat's October edition of On Campus.

Published in partnership with: