Khosiyat (Hosi) Mamatraimova '22 started her new career as an echocardiographer at Mayo Clinic in August 2022. Just a handful of years prior, however, she was on the other side of the globe in her home country of Uzbekistan.

When Hosi was just 16, her mother passed away, and she and her sister moved to 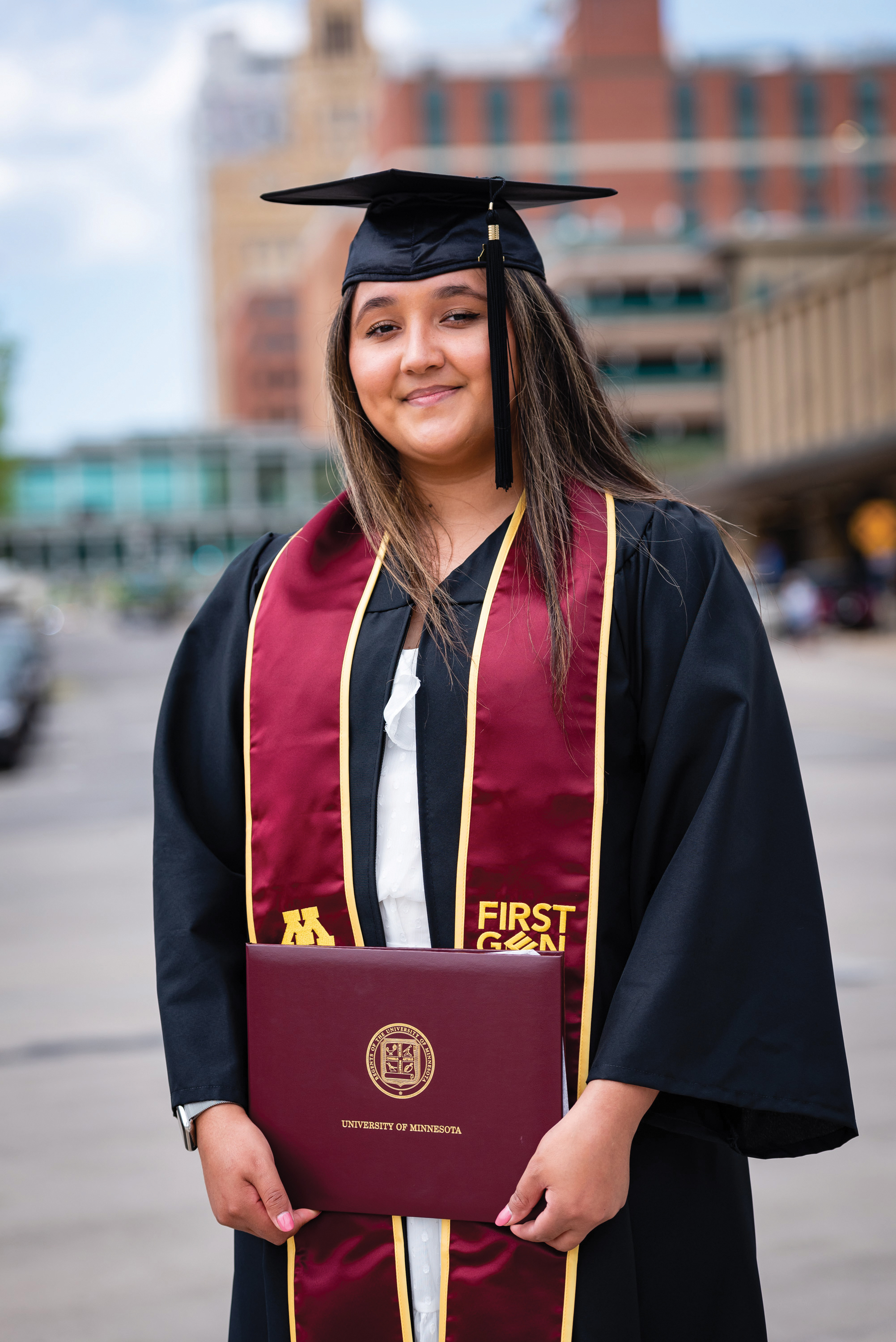 the United States to be with their dad, who lived and worked in Minnesota. Initially, their dad sought to ease the sisters’ transition to the U.S. by relocating to California. “He thought Minnesota would be too cold for us, but we loved it. I love the snow,” Hosi says. After a few months, they moved permanently back to Minnesota, settling in Minnetonka.

Speaking little English – her primary languages were Uzbek and Russian – Hosi’s transition to school in the U.S. was initially rough. But she persevered, graduating high school and mastering English in the process. Hosi began attending classes at Normandale Community College in Bloomington, with a focus on business. That never felt like the right fit, so Hosi briefly switched to nursing, then back to liberal arts to get her Associate of Arts degree. Meanwhile, she attended a job fair, hoping to find a flexible work schedule that meshed with her school schedule. There, she connected with a private nursing home looking to hire a caregiver for women with physical and mental disabilities.

As an in-home caregiver, Hosi would often bring her patients to medical appointments. Little did she know that this experience would lead her to her new career. “One of the girls [I cared for]had Down syndrome and a lot of heart issues,” Hosi says. “I used to take her to appointments, including cardiology. I found that I loved learning about cardiology and would ask questions at her appointments.” This led Hosi to ask her counselor at Normandale about medical programs, outside of nursing, that focused on the heart. The counselor introduced her to the Bachelor of Science in Health Professions (BSHP) echocardiography program at UMR. “Echocardiographers take sonograms of the heart, prepare reports and work closely with cardiologists to help identify heart issues. She told me it was a competitive program, but if I could get the grades needed, she would help me get in.”

Soon after, Hosi toured radiography and sonography during an open house event at UMR. “I just loved how the Mayo Clinic system worked,” she remembers. With her heart set on echocardiography, she applied and was accepted. “I had never taken a class at UMR, so it was tough at first,” Hosi remembers. “Cassie in admissions helped a lot. And some of my classmates who had been at UMR for two years already helped me figure everything out.” Complicating matters, Hosi and her classmates started their new program in 2020, right in the middle of the COVID-19 pandemic.

As the world went virtual, so did much of education. This program, however, didn’t do away with in-person learning completely, much to the gratitude of the students. “We did all classes online, but scan labs and clinicals were in person. We were a class of only nine students, so we were able to meet in person, which was essential to learning,” Hosi believes. “One of the great things about the program is that you start clinicals almost immediately. It was so helpful getting that experience in the clinical setting, even if you’re just rooming patients at first, to feel more comfortable in the role. If you learn something from a book or in the classroom and then you see it in the clinic, it all makes sense.” Not only were the students getting real-life experience, they were learning side-by-side from the cardiac sonographers. “You don’t just learn from the class teacher, you actually learn from the cardiac sonographers who are doing it day in and day out.”

As Hosi progressed through the program, she and the other students were encouraged to actively use the skills they learned to prepare them for their careers. “By the time we graduated, especially during senior year, we were allowed to be more independent. You would do the whole test by yourself (supervised), talking to the cardiologist on your own and getting the patient on your own. This forced us to not depend on another person to do it for us. By the time I started my job, I knew the process. There was still more to learn, of course, but we knew everything we needed to know to start the job and be comfortable in the role. We were prepared to recognize things we needed to look more closely at, or issues that we may encounter.”

Hosi graduated from the BSHP program with a certificate in echocardiography from Mayo Clinic School of Health Sciences in May 2022, and started her new job just a few months later. Settling into her career at Mayo Clinic, she feels at home. “I’m in an apartment now, living near classmates in the same apartment complex. I’m excited for winter to come. I love downhill skiing. I usually get a night pass from Welch Village and go after work and ski late into the night. Sometimes with friends, sometimes by myself. It is peaceful and fun.” While the future may hold more education — “at some point I will go back and get my Master’s degree” — for now she has found her career, with heart.

Read more stories from the Fall 2022 Alumni Magazine: The Kettle.